Let's start with the one reason that is at the forefront of most people's minds, MONEY:

1. As you may have heard, a solar power system can save you money. Well, you heard right. The most common two ways of buying a solar power system are paying cash or financing. Options such as Leasing or Power Purchase Agreements (PPA) are another two ways. At Sunbrook Solar Power, we only offer cash and finance options. Although leasing or PPAs may work for some, they have their drawbacks and should only be considered after exhausting cash or financing options. One major point is that when paying cash or financing a system, you receive the federal tax credit (26% this year, 2020), and therefore you will save that much more money!

Net Metering (NEM) allows you to sell all your solar power systems exports (the power, and ultimately kWh's, not instantaneously used by your dwelling or building) for the cost of import during the time in which the export is received by the utility. In other words, if you export 1 kWh when the cost of 1 kWh imported is $0.30, you get $0.30 for that exported kWh. Because of this, depending on the solar power system size and your usage, a system will generally have a payback period of 4-9 years with a cash purchase. A financed system will pay itself off depending on the loan term, but most solar loans have no prepayment penalty, so you can shorten the payback period if your able to do so.

After the payback period is realized, most systems will have 20-25 years of production still to come, with a yearly degradation rate of only 0.4% - 0.7%, depending on the solar panels used. Over those 20-25 years, using an average system size of around 6kWs, and considering the cost of electricity going up every year, the avoided cost of electricity, is in many cases, close to or over $100,000! It is proportional to usage/system size in individual cases, but the savings are real and plentiful! One of the best investments there is.

Another monetary advantage of getting a solar system is the increased property value. In most cases, there is value in an existing system. 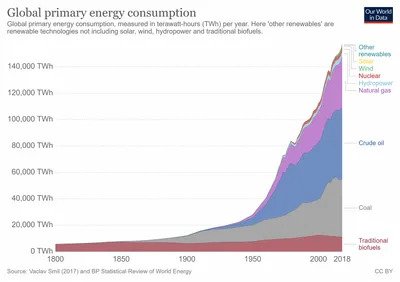 2nd reason, or 1st, depending on who you ask, it helps the ENVIRONMENT:

2. As you may have heard also, a solar power system can help the environment. Well, you heard right again. I am going to go a slightly different route here, but it relates.

Objective Truth #1: The Sun provides the Earth with an abundance of power.

Objective Truth #2: The Sun's power in a given area, or solar irradiance (Watts per square-meter or W/m²), is near 1000W/m², on a clear day at sea level on Earth's surface.

Objective Truth #3: We have a technology in solar cells, that become solar panels, to harness the Sun's power, which is conservatively 18% efficient at doing so.

Let's quickly put pWh's (petawatt-hours) into perspective with kWh's (kilowatt-hours) since most are familiar with kWh's.

Ok, there is a global population of almost 7,800,000,000 people as of this writing, so we will leave it there for the calculations.

That number may seem high to some of you because that is more than most average households with 2-4 people living in them. This is everything though! The grocery store, your office building, the manufacturer, the hotel, the restaurant, the hospital, the bowling alley, etc.

Why am I showing you these calculations? To ultimately paint a picture, of how so little can go a long way in a very clean way, by answering this question:

How much LAND is needed to power global energy consumption for one year using solar panels?

We already have the value of 180W/m² from above.

That means that the Sun will shine on earth's surface and 1 m² of a solar panel will produce 328.5 kWh's in 1 year.

We need to also take into account soiling, transmission and conversion losses. Let's use 10% (.90).

Since we are talking about the southwest United States, let's look at Texas.
Texas is 261,000 mi² of land.

That means that Texas is 118% the size of the giant solar array that we need. Great!

Ok, we are talking about the whole planet though. Let's break this solar array up!

ourworldindata.org has totals on consumption and a regional breakdown. It is 2018 numbers but let's carry them into 2020.

The square miles needed for each solar array looks like this:

The solar arrays can be broken down further into the region's countries or states, cities, villages, buildings and dare I say....houses, to accomplish local solar power resources.

The extra land will be perfect for mitigating module to module shading and housing much of the needed equipment. This of course wouldn't be the best approach for transmission to the different region's. But let's stick with Texas just to show the consolidated view for perspective.

Solar Power is a clean and abundant source and the impact on the environment is minimal, with a CO2 payback of 2-3 years depending on their production. With a 25+ year lifespan, and a minimial degradation rate/year mentioned earlier, the benefits are an objective truth. You can play a part in the percentages and reduce your carbon footprint, as well as the overall. Use this technology to your advantage, and to the Earth's!